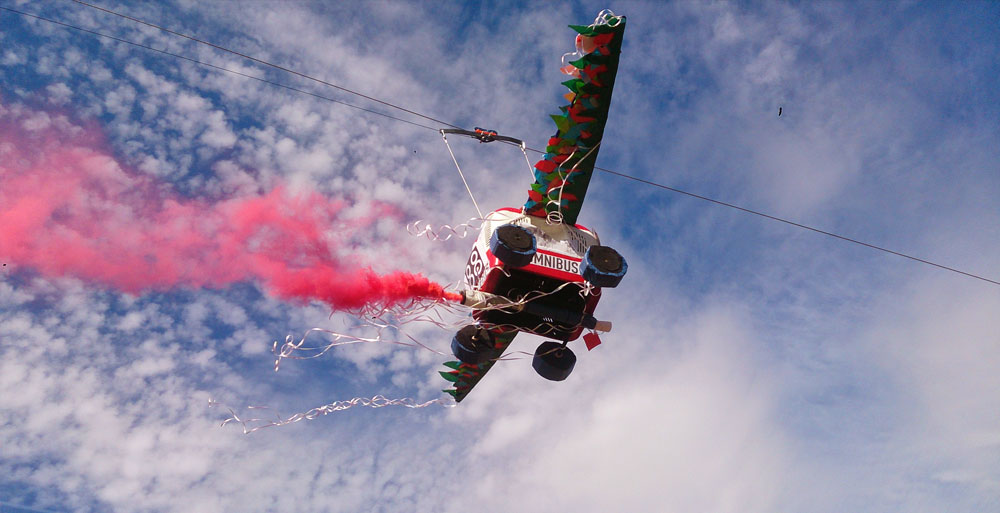 On Friday 6th June 2014, Lambeth council opened the newly refurbished Old Town Square. Omnibus was in the privileged position of organising the entertainment for the event… and entertain we did!

We provided a dragon, jazz and acoustic bands, flash mob dancers, a choir, stilt walkers, celebrities –  and a flying bus! Towards the end of the ceremony the crowd were wrapped up in the ceremonial ribbon, given scissors, and collectively opened the square together… all under a blue sky.

We hope everyone who did make it had a great day and feels as proud as we do about being part of a positive and lively community. We have so many people to thank for making the day a success and we hope this post provides those who couldn’t make it with a breakdown of the day’s events, as well as expressing our gratitude to those involved.
There is a list of thanks to those who took part at the bottom of this post – credit where credit’s due!

Break-down of the day’s events:

3.30pm
Omnibus staff donned red t-shirts and headed across the road to kick off entertainment at half past three – when crowds had already gathered. A red mechanical dragon greeted families as they wandered over from nearby schools. The children used spinning dials on its side to move its head and wings. Dr. Bike had a cycle maintenance tent, and the appointments filled up quickly with local cyclists eager for a check up. Clapham Society’s tent offered a glimpse into local history, and Trinity Restaurant and Prince of Wales pub provided free food and drinks.

4.10pm
Watch your heads! The Omnibus flying bus came swooping down from the roof of local pub The Prince of Wales to the centre of the square with a red flare trailing behind it – Flanders and Swann’s ‘London Omnibus’ played as it descended. It was quite a sight! The bus itself was created by the visual arts team at Omnibus. It had the faces of our artistic director and chairman George Owen on the front. On the sides were drawings made by children in an Omnibus arts class, and on the back: ‘ROUTE 88’ – our local bus route (and the name of our monthly Acoustic Night!).

4.15pm
Attached to the flying Omni-Bus was a poem about Clapham by Shobu Kapoor, an Eastenders actress who grew up in Clapham. She read the poem beautifully.

4.30pm
Flash-Mob! Dancing like everyone was watching, (and very well, too!) friends of Omnibus and Omnibus staff shook their tail-feathers to a medley of classic happy tunes, and were joined by staff from nearby businesses including Waitrose and Experian, as well as pupils from years 5 + 6 at Macauley School and Clapham Manor School.

4.40pm
Out came the stilt walkers dressed as angels from Other Half Productions – who wandered into the crowd greeting children and making them laugh!

4.45pm
Cllr Christopher Wellbelove, who was standing in for the Mayor of Lambeth, planted a tree in the square with the assistance of local children.

4.50pm
The angels on stilts rounded up the crowd and the people on the outer-edge were asked to hold the ribbon. Scissors were passed around and on the command, everyone cut the ribbon together, symbolising the community taking possession of their new space.

5.00pm
Superspokes – friends of Omnibus and hosts of Acoustic Night, sang their hearts out accompanied by their trademark guitar and cajon combination. The performance was highly appreciated by littler locals, who danced away…

5.30pm
Junction Jazz filled the square with easy-going music, taking us into the evening.

Special thanks go to:

Nicol Marquis for the majority of fantastic photos!