This Autumn, Studio Voltaire asked Omnibus Visual Arts to invite members of the after school art club and participants from their workshops at St. Mungo’s-Broadway to come to work with Venezuelan and Berlin-based artist Sol Calero. From 12 October – 2nd November 2015, the students were making their own painted and drawn interpretations of the Carribean ambience and familiar images of tropical abundance.

Studio Voltaire was originally set up as an artists’ collective studio space in a former tram shed in Voltaire Road, Clapham in 1994.  The move to 1a Nelson’s Row in 1999 enabled the organisation, now a registered charity to grow from 12 to 45 artists’ studios and an adjacent Victorian former chapel has become their gallery. The studios have hosted a number of residences for national and international artists and partners which have included the Berlin Senate, Collective Gallery, British Council, Outset and Royal College of Art. 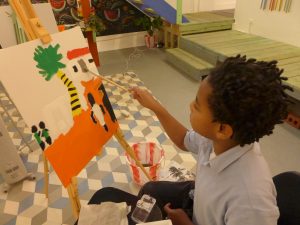 In her residency at Studio Voltaire Calero has turned the interior of the chapel into a tropically coloured extravaganza. The colours and images come from full size painted facades derived from the architecture of the Venezuelan islands of Los Roques and outrageously exuberant coloured chalk drawings of tropical fruit are erupting all over the blackboard in the part of the chapel which has become a temporary ‘schoolroom’. Just walking into the space was an exciting shift away from the grey October streets of Clapham.

The cultural context of this exploration of images from her country of birth is this: culture has recently become a site of increased government intervention. “The government is trying to invent an identity for the country,” says Calero. “They closed the University of Art, fired all the professors, and are now teaching the students to make propaganda art.”

In the course of the workshops all the participants were encouraged to freely develop their own ideas.

Artist in Residence at Omnibus