“I’ve never been to Southend before.”- Lynsey.

Except, I have! I’m originally from Basildon in Essex but moved to the Isle of Sheppey in Kent and stayed there for 11 years or so. Although my mums back in Essex now and is about 10 mins from Southend, I always say I hate it there. But I think I’ll always have a soft spot for it – “Probably the thought of chips and an ice-cream!” says 10 year old me. “Yes, you’re most likely bang on.” replies fully grown Rebecca. I’ve not spent much time in Croydon though, where were rehearsing at The Shoestring Theatre.

Day one began with a brief introduction and a desperate attempt to avoid eye contact with a couple of cakes. We jumped straight in with discussions on set design and concept before moving onto sharing gems that Scott had discussed with Simon. For example, “Why call it Country Music?” Scott expressed he loved the idea of a simplistic set and staging vs the emotion that drives the scenes forward. I liked the idea of that contrast too so straight away felt like we were on the same page.

We had a read through all together, which was very lovely. The whole play is full of tiny little diamonds that just hit you in the face. I found myself smiling at the authenticity of the vernacular. Most probably because it felt like home. Although, not sure if that’s a completely terrible thing or not! We moved onto creating a timeline for the play. Because it’s so driven by the visceral and instinctive emotion, it felt reassuring to check the facts and give it an anchor whereby everyone’s starting on the same page. Thinking about it, day one felt like a lot of questions. Lots and lots and LOTS of questions! Opening them up and chucking them in the air for everyone to think about. I left feeling like I was buzzing. 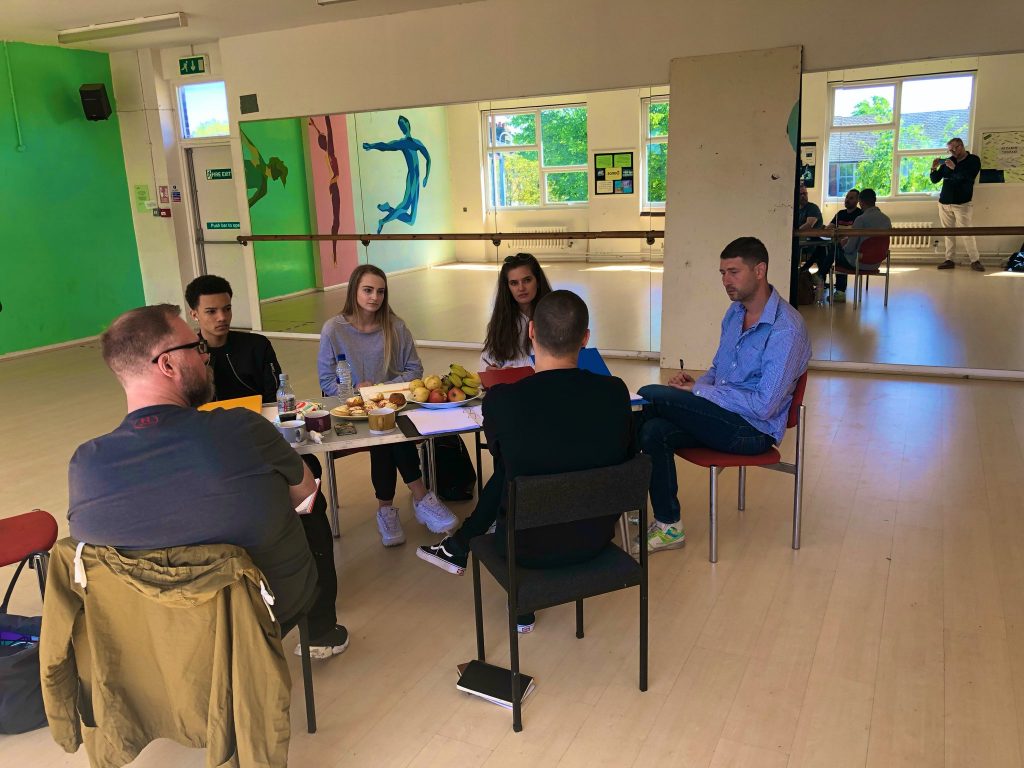 “It’s alright for you Jamie. I ain’t got nowhere else to go.” – Lynsey.

Day two rehearsals began with another blue sky. This time just myself, Scott and Cary for the day. We began working chronologically through our scenes and had a read through it all. We started to unpack the narrative and answered some of the big questions we had about Lynsey and Jamie. Scott then split us up to discuss given circumstances and our characters history privately, so that we didn’t know what decisions were made between the other person and Scott. I think it’s so important to strike a balance between the public and the private, with other characters within the play, as well as the audience. It provokes a sense of ownership over with your character, to have some secrets I think.

We moved onto uniting and titling each scene in a way that made sense to us. The pace of the scenes is so quick, blink and you’d have missed something wonderful, so it was nice to find that structure and clarity that allows the scene to not feel like it’s all very similar. Before I knew it, we were on our feet! If I think about it, this is the first play I’ve done where we’ve been up in the space so quickly. We got explored different objectives and character motives for both scenes. In a way, it felt too early to be able to play with that kind of stuff, but we’ve not got long so it was exciting just going for it.

Even though the play is a four-hander, the scenes never bleed into each other. Lynsey doesn’t come into contact with Emma or Matty on the pages. So, in a way it does feel like a two-hander. I was chatting with Cary on the bus home and we agreed it’s more intense just us and Scott, because you’re constantly immersed in the creative discussion. And what Scott has already shown so wonderfully and with such ease, is that our voices are heard. It feels like a very collaborative process already and that everything is open to discussion, which is a lovely thing. I think it makes the space more interesting and safer, in a way. Especially when you’re dealing with such complex characters like this, you need the breathing room.

“Our creativity comes from the need to repair things that were broken. The need to complete sentences that were interrupted.”
– Simon Stephens.

There’s nowhere to hide in a Simon Stephens play, mate. It doesn’t lend itself to that sort of thing. He doesn’t sugar-coat a single syllable. There’s an authenticity you can’t buy, you can’t manufacture it. And people can taste the difference. It’s empowering to be working with a Director and Writer who are both so passionate about lifting the ropes for the Working Class and for Working Class artists and letting them climb in. I’m so looking forward to getting stuck in and letting it knock me for six, because it’s a great group of people and it’s gems like Country Music you hope for on days when the sky isn’t as blue.