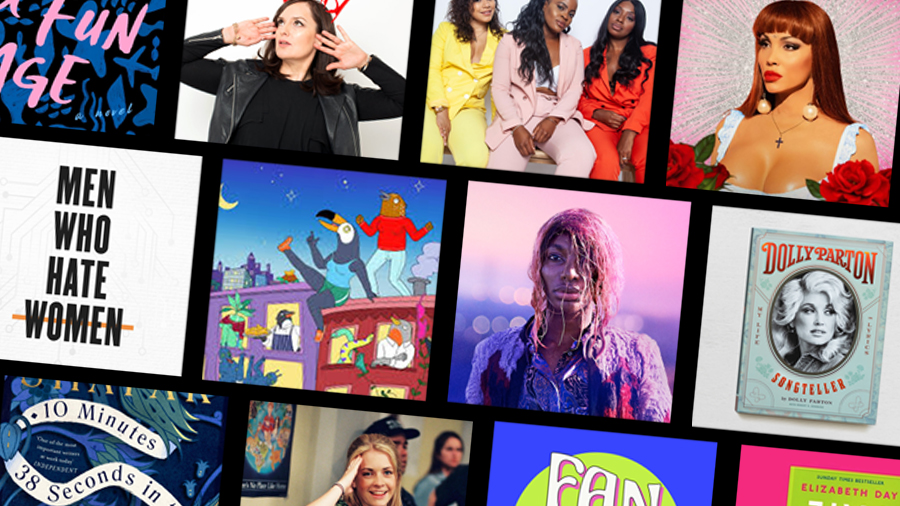 I was obsessed with this show growing up. I would spend whole half terms binge watching Sabrina the Teenage Witch before binge watching was even cool. I played the video game and to this day still have lucid dreams where I am inside it.

To me Sabrina was a role model, she was the epitome of 90s #GirlPower. I desperately wanted to be her, living in a gorgeous turreted house in small town Massachusetts spending my days chatting shit with a sardonic talking cat and getting into all sorts of magical shenanigans.

Sure it’s silly. Very silly. Six foot flan, rivers of candy corn, toaster mail silly. But it was also so important to me as a young girl to see this portrayal of a female-led household full of fun, smart, compassionate women with great life lessons peppered throughout.

Not only that but Sabrina was brought to life by a majority female writers room helmed by a female showrunner (Nell Scovell, whose name you may recognise as co-writer of Sheryl Sandberg’s Lean In).

I May Destroy You

One of the best things I have ever seen, Veneno is the unmissable true story of Valeria Vegas, a young trans journalist who, through a twist of fate, meets her childhood idol Christina Oritz Rodriguez aka La Veneno, the legendary Spanish TV personality, singer, actor, sex worker and trans icon.

Their relationship becomes one of mother and daughter, writer and subject as they mine Veneno’s tragic and triumphant life story, from the rural village of Adra to the park corners of Madrid and television screens of late-night to write Veneno’s memoir ¡Digo! Ni puta ni santa. Las memorias de La Veneno (Listen! Neither whore nor saint. The memories of La Veneno).

Created by Lisa Hanawalt (Bojack Horseman) this animated series tells the story of two 30-year-old anthropomorphic bird best friends. Tuca (Tiffany Haddish) is an impulsive, free-spirited toucan who along with her best friend Bertie (Ali Wong), an anxious song thrush, tries to make it through whatever life throws at them.

Series 1 of this fun abstract adult cartoon is on Netflix with the second series premiering later this year on Adult Swim.

THINGS TO LISTEN TO

In this new podcast host Lucy Ford chats to her guests about “loving things in a really very rubbish year”. Each guest is given the floor to wax lyrical about the things they love, from Lady Gaga to Eastenders, BTS to Alison Hammond.

Lucy has created a forum for shameless enthusiasm, and for me there is nothing better than listening to people rave about their faves. I just love people who love things!

A very funny and thought-provoking chat style podcast hosted by three brilliant women. It has been one of my 2021 discoveries, and I am now very quickly making my way through all 100+ episodes. It is one of those podcasts that has you laughing out loud to yourself in the middle of Tescos (my fav kind).

How To Fail with Elizabeth Day

A podcast for anyone who has failed at something. Each weekly episode sees Day interview someone (Gloria Steinem, Alain De Botton, Nadiya Hussein, Bernadine Evaristo, Mo Gowdat, Phillipa Perry to name a few) on their biggest failures. There’s a lot of shame around failure, but these insightful conversations embrace failure as a crucial aspect of life. It’s fascinating to hear these high-profile people make themselves vulnerable by revealing moments in their lives that in other interviews they may gloss over or avoid. It’s a lot more uplifting than it sounds – really funny and Day is a great interviewer.

A very human and approachable look at feminism and the female experience.

The Handmaid’s Tale by Margaret Atwood

Potentially my favourite read of all time, this one is pretty iconic, one that most will have heard a story about or perhaps caught a glimpse of those famous red cloaks. Although it follows the story of women painfully oppressed in an autocratic system that seeks to use them only for their reproductive abilities, The Handmaid’s Tale is also a full-fledged tale of female strength and resistance in the shadow of male hegemony.

Brave, Not Perfect by Reshma Saujani

Founder of Girls who Code, Saujani initiates young women into the technology world. She reminds us to be bold, take risks to be brave, not perfect.

10 Minutes 38 Seconds In This Strange World by Elif Shafak

One of my favourite reads – 10 minutes is the book I always recommend to friends. Charting the life and death (not a spoiler I promise) of sex worker Leila Tequila, it is a really powerful and heartfelt story exploring the trauma women face at the hands of patriarchal systems, as well as celebrating friendship and the families we choose for ourselves.

How To Be A Woman by Caitlin Moran

This book follows Moran’s early life from her 13th birthday to her mid-thirties. It includes her life experiences and views on feminism.

Her funny, easy to read writing style mixed in with her own personal experiences makes the book a very approachable way to read about feminism.

Such A Fun Age by Kiley Reid

20-something Amira is accused of kidnapping a child whilst in a supermarket. Amira is black and the child she is babysitting is white. The ordeal is filmed, released on Twitter and the book charts the fallout of this event. The story focuses on Amira’s relationship with the mother of the family she babysits for, Alix – who is desperate to befriend Amira, and becomes inappropriately obsessed with her. Alix’s arc shows how white allyship can veer into self-serving narcissism. If you’re a white woman you need to read this book and make sure you are never Alix.

This hugely entertaining and readable novel is Kiley Reid’s debut novel, published at the end of 2019.

A book by Laura Bates that looks into Incels and pickup artists that walks a line of funny but in a scary way.

Songteller: My Life in Lyrics by Dolly Parton

If there’s one thing we can all agree on it’s Dolly Parton. At 75 and after five decades of breaking barriers for women and subverting stereotypes, the legendary songwriter, entrepreneur, actor and hyper-femme fashion icon is letting us peak behind the bejewelled curtain of her extraordinary career and life.

I recommend marking this IWD by taking a soothing cup of tea to a window-side chair in your home and diving into this autobiographical page turner, crank up the Dolly for a truly immersive experience.