By Omnibus TeamApril 15, 2019Press and announcements 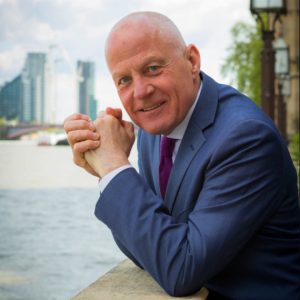 Omnibus Theatre is delighted to announce Lord Michael Cashman, co-founder of Stonewall and leading LGBTQ+ equality rights advocate, as its newest patron. He joins as the sixth high-profile patron from across the arts and theatre community. The announcement comes on the eve of the theatre’s 96 Festival, London’s only queer arts event held under one roof, taking place from the 19th Feb to 31st March.

Lord Cashman comments: “I’ve had a long association with Clapham and what I find about Omnibus Theatre is that it’s an exciting and vibrant venue that not only embraces local audiences but also artists and creative communities. It reaches out from its history right the way to now and the future, to its celebration of diversity, inclusive programming and challenging theatre.”

He adds: “It’s important for us to remember that it is also LGBTQ+ history month and therefore the work being done at Omnibus Theatre also connects up on a national level and it’s become a very important focal point for the South West and wider.”

Artistic Director Marie McCarthy comments: “I am so thrilled Michael has agreed to be our patron. His long association with Clapham, his brilliant advocacy work involving LGBTQ+ equality rights makes him a great asset to our organisation and addition to our brilliant line-up of patrons. We look forward to working with him and particularly his participation heading up this year’s 96 Festival launch panel event.”

The 96 Festival launch event will kick off with a special panel discussion exploring questions around how queer communities experience divides around class, ability, race and gender and how art can bring the community together in shared moments of connection. How can we reinvent queer activism?

About 96 Festival
96 Festival, is now in its second year and takes place from 20th Feb to 31st of March. This year, a glittering line-up of artists will set up camp at Omnibus Theatre for a spectacular no holds barred extravaganza of cabaret, drag, burlesque, theatre, music, art and activism; 96 Festival was conceived in remembrance and celebration of the iconic Pride party on Clapham Common in 1996. This year the festival is being held in association with DIVA magazine. A special opening night launch event will take place on the 19th February.
Listings information: Please use this link online – https://www.omnibus-clapham.org/96-festival-2019/

About Omnibus Theatre
Omnibus Theatre is a multi award-winning independent theatre in Clapham, South London. Shortlisted Fringe Theatre of the Year 2019 The Stage, A recipient of the Peter Brook/Royal Court Theatre Support Award 2016 and Offie winner 2018. The heart of our ambitious programme, inspired by our building’s literary heritage, lies in both classics re-imagined and contemporary storytelling. We provide a platform for new writing and interdisciplinary work, aiming to give voice to the underrepresented and challenge perceptions. We believe in affordable tickets and theatre for all. Since opening in 2013 notable in-house productions include Woyzeck (2013), Macbeth (2014), Colour (2015), Mule (2016), Spring Offensive(2017) and Zeraffa Giraffa (2017). Omnibus Theatre is led by Artistic Director Marie McCarthy. Patrons include Dame Judi Dench, Sir Michael Gambon, Matthew Warchus, Sir Richard Eyre and Maggi Hambling. We are a registered charity and receive no core funding. Omnibus_theatre | @Omnibus_Theatre