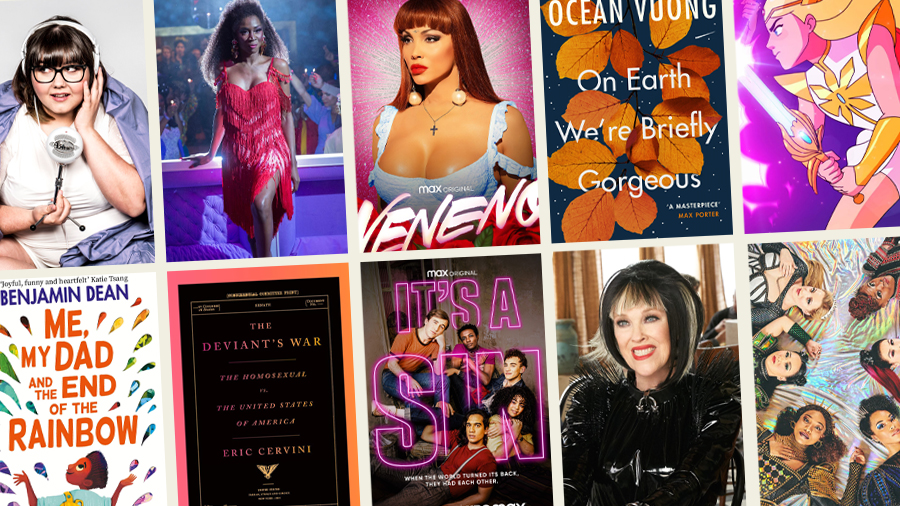 She-Ra and the Princesses of Power

This magically queer re-boot of the 80’s cartoon is filled with enchanted swords, princess proms and a whole galaxy of gender expressions. On the rainbow-filled planet Etheria, queerness is normalised rather than otherised and chosen families are celebrated rather than side-lined. Audiences get to know a colourful cast of queer characters from non-binary shape shifters to same sex couples and trans princesses, without having to endure a single tired ‘coming out episode’.

Together with her chosen family of the Princess Alliance, Adora, Glimmer and Bow fight to overthrow the oppression of the evil Horde Prime and in turn empower girls, celebrate queerness, challenge patriarchy and promote hope and unity for a new generation of She-Ra lovers. It’s the show I wish I had when I was a kid but I’m glad we have it today.

Believe the hype – it really is something special. Exploring the world of Ballroom in 1980s/90s New York, Pose will make you sob whilst also placing the biggest of smiles on your face. Filled to the brim with energy, talent and an abundance (!) of love – this is not one to miss.

Each episode was brilliantly written, heart breaking but also laugh out loud funny at times. It brought back the world that I remember when I first came out – the fear, the discrimination but also the love and support that we had for each other.

It is all I have been talking about as it is simply amazing. One of my favourite television shows ever. Based in the 80s this TV show tells the story of 4 young gay men who have just tasted their first bit of freedom away from their families. However, there is a rising concern about a new virus that “only effects gay men”.

This amazing heartfelt drama written by Russell T. Davies (Dr Who, Queer as Folk) tells the story of these young adults over the decade and how they cope with the HIV/AIDS crisis.

It is an absolute must watch with amazing performances from the whole cast and a beautiful storyline.

Don’t Ever Wipe Tears Without Gloves

If you’re a fan of Channel 4’s It’s a Sin, then this Swedish series is for you. It details the lives of Rasmus, Paul and Benjamin and the struggle of Stockholm’s Gay community against AIDS during the early 1980s.

A tragically fascinating exploration of medical misconception, family rejection and religious conflict, Don’t Ever Wipe Tears Without Gloves is as much a personal journey of self-discovery as a critical reflection on society at large. Where dominant discourses and other cultural pursuits highlight how AIDS affects the English-speaking world, particularly in New York, San Francisco and London, this series shines a light on a less-extensively covered group of people.

A black trans led channel that doesn’t get the same level of attention as it’s a lot more direct and outright oppositional of closed up views. She features a lot more sexual/gender identity talks and has covered a vast majority of Identities and sexual preferences.

Hello the one person who hasn’t already binged this show to death. Yes, I’m talking to you.

Schitt’s Creek is the riches to rags tale of the Rose family, who lose everything except the deeds for a town purchased as a gag gift. From bébé, The Crows Have Eyes 3: The Crowening, Moira’s wigs, David’s jumpers, ‘A Little Bit Alexis’ (including the iconic Kelly Clarkson remix) and its endless gif-ability – there’s so much I can scream about when it comes to this hilarious, warm show.

At the heart of the Schitt’s Creek is David, who identifies as pansexual, and Patrick, who identifies as gay. The show never treats their relationship like a stand-out thing, there’s no coming out storyline, no prejudice or even raised eyebrows. They are never ‘the gay couple’, they are just a couple experiencing all the natural highs and lows of falling in love and building a life. This positive presentation of a queer relationship is a rarity across the TV and film landscape that I really hope to see more of.

One of the best things I have ever seen, Veneno is the unmissable true story of Valeria Vegas, a young trans journalist who, through a twist of fate, meets her childhood idol Christina Oritz Rodriguez aka La Veneno, the legendary Spanish TV personality, singer, actor, sex worker and trans icon.

Their relationship becomes one of mother and daughter, writer and subject as they mine Veneno’s tragic and triumphant life story, from the rural village of Adra to the park corners of Madrid and television screens of late-night to write Veneno’s memoir ¡Digo! Ni puta ni santa. Las memorias de La Veneno (Listen! Neither whore nor saint. The memories of La Veneno).

Trans/philosophy/politics channel that does a great job of discussing multiple views without outright dismissing any side without exploring it first.

The debut novel of American-Vietnamese writer Ocean Vuong which was published a couple of years ago. He’s such a beautiful writer and his background as a poet really shines through in his prose. The novel draws on elements of his own life as the grandson of a Vietnamese woman and an American soldier posted to Vietnam during the war. It’s written as a letter from the point of view of a son to his mother, a mother who doesn’t speak English or read in any language. It’s about family history, existing in multiple worlds, race, class and first love.

It tells the story of Little Dog growing up in Connecticut, interwoven with the story of his mother and grandmother in Vietnam. At 14, Little Dog takes a summer job, cycling two hours there and back to a tobacco field where he picks tobacco and starts a relationship with the tobacco farm owner’s ultra-masculine son Trevor. The passion and precision of the way Vuong writes about their relationship is truly breath-taking and really engaging.

A poetic and moving exploration of love, race and class in America. It’s incredibly beautiful – and with a film adaptation just announced, it’s one to add to the top of your reading list. It’s also definitely worth checking out Vuong’s poetry collection Night Sky With Exit Wounds too.

The Deviant’s War by Eric Cervini

Continuing with my It’s a Sin–fuelled obsession with the AIDS crisis, I bring you The Deviant’s War. Admittedly I’m only just getting into this novel, but it was recommended to me based on its biographical portrayal of Franklin Edward Kameny, Harvard and Cambridge trained astronomer turned gay rights activist.

Subtitled The Homosexual vs the United States of America, it’s a story heavily peppered with legal and political terminology and theory, yet it all comes down to one man’s struggle for long-term employment, financial stability and acceptance.

Me, My Dad and the End of the Rainbow by Benjamin Dean

Me, My Dad and the End of the Rainbow is a debut from Benjamin Dean. It’s the story of Archie Albright who, after his dad comes out, goes on an adventure with his best friends to “the end of the rainbow” aka London Pride, meeting a whole host of diverse and wonderful people en route.

This book is for ages 9+ and it’s so great that children are going to be able to grow up with this positive and representative LGBTQ+ story that celebrates love and family in every form. There are certainly children who will see themselves and their family reflected in this book, possibly for the very first time. Put it in every classroom!

THINGS TO LISTEN TO

Danish comedian Sofie Hagen’s podcast. Each week they interview different people from the public eye – amazing writers, activists, influencers, politicians on “how to do life”. Sofie finds the most fascinating people to interview, and through her thoughtful and sensitive approach has amazing conversations about things like gender identity, fat activism, therapy and mental health, race, privilege – and SO MUCH MORE. Some great recent episodes have seen her talking to MP Dawn Butler, Travis Alabanza, Lindo Bacon and Sophie Duker.

All interviews are also transcribed on her website so accessible for anyone who may prefer / need to access the conversations this way.

I would also really recommend following Sofie Hagen on Instagram for some Grade A pet-content in the form of her dog Hank, who you can sometimes hear in the background whilst she’s podcasting.

Another one of my favourites. This time my favourite musical. Six tells the story of Henry VIII’s wives from their own perspectives. Taking out the male voices and letting the women tell the story.

The show is written by Toby Marlow and Lucy Moss, who identified a lack of gender diversity in the theatre industry. This led to them only casting people who identify as female or non-binary and focusing on queer perspectives.

This fun show displays a wide range of music styles with each queen being based off of a pop singer and of course Haus of Holbein which is a fusion of euro pop and history. It is a joy to listen to and you may even learn somethings about Tudor history in the process.