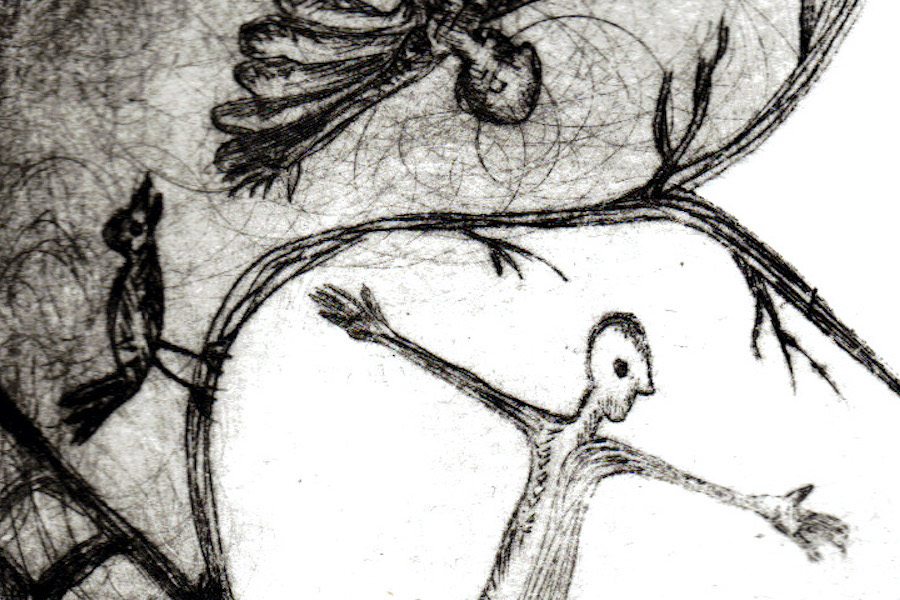 Jozefina Komporaly | Re-composing Theatrical Forms in the Time of Pandemic

By Omnibus TeamJune 14, 2021News
No Comments

Matéi Visniec‘s Decomposed Theatre is an experimental modular play, like a series of surreal short stories, which can be arranged and rearranged in any order. The play was written shortly after the author fled the Ceauşescu regime in Romania to settle in France, and reflects on themes of censorship and ideology. Since then, these fragments have presented a fascinating provocation and conundrum for theatre-makers worldwide, who have accepted the challenge to decompose the text and recompose it in a wide range of permutations, from solo performances to collaborations with large international casts.

The version director Kate O’Connor and I have worked together centres on three of these fragments that describe a vision of three plagues descending on an unnamed town, each one more strange and more insidious than the one before. Through Visniec’s absurdist wit, we have been aiming to reflect on our own current experience of crisis and change, the impact of a pandemic on our everyday lives, media consumption and political reality. As a play following the principles of open dramaturgy, Decomposed Theatre is an invitation to think creatively about the relationship between text-based theatre and multiple modes of performance making, and in an earlier incarnation this recording was streamed by Trafika Europe Radio and the Romanian Cultural Institute in New York and London.

I have been collaborating with Matéi Visniec for many years as a translator and academic, and find his work in both theatre and fiction a spot-on commentary on our times. My translation of his novel Mr K Released (Seagull Books, 2020), shortlisted for the 2021 EBRD Literature Prize, is a case in point: as a work on captivity, this book is the ultimate guide on how to survive confinement and deprivation of freedom, and an ironic reflection on the eerily familiar experience of ongoing deferral.

Decomposed Theatre also had its fair share of deferrals, not in the least due to the pandemic. Kate and I had first talked about a possible collaboration a couple of years ago, then thinking of live performance, but in the meantime decided to embrace the play’s potential as an aural experiment. For this occasion, I have also chosen to significantly revise my earlier translation into English, bearing in mind the conditions and challenges of an audio adaptation. We also had an agreement that small tweaks could be made to the text in rehearsal, to suit the various characters. For example, the News Anchor would begin their fragment with ‘Good evening’, whilst the Social Media Influencer would be drinking an ‘oat milk latte’ rather than a plain coffee.

Working with a single performer not only didn’t limit but actually added to versatility, as Maria Forrester’s amazing vocal range brought to life an entire host of diverse characters and situations. Being familiar with the demands of recorded media through having worked extensively in TV and film, Maria thrived on Kate’s directions that juxtaposed various performance modes, from a TV news anchor to nature documentaries, liturgical extracts, a press conference in the style of Boris Johnson’s coronavirus lockdown briefings or a social media Vlogger. This fascination with multiplicity and journalistic lenses is in close keeping with Visniec’s own style and parallel career as a commentator for Radio France Internationale. It is also a nod to the playwright’s other work that we have consulted in the process, such as his topical play The Man Who Had His Inner Malice Removed (forthcoming from Bloomsbury in the volume Plays from Romania: Dramaturgies of Subversion) that deals explicitly with the question of news reporting and ways of addressing the prospective audience. Sam Halmarack’s sound effects, including the David Attenborough-style sounds of nature and the backdrop of a busy street, further added to the nuances and depth of character explored by Maria. We hope that the result is a piece that will resonate with listeners beyond the current moment, even if we may all end up looking at butterflies in a new way from now on…

Decomposed Theatre is available as a podcast and on YouTube. Find out more here→