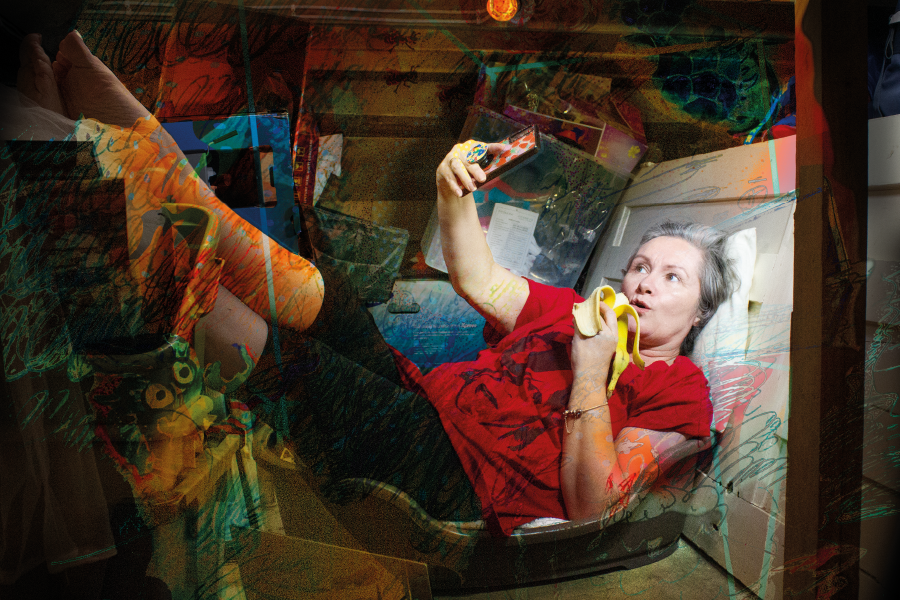 By Omnibus TeamJanuary 14, 2022Press and announcements
No Comments

Omnibus Theatre is delighted to announce their Spring 2022 theatre season.

“This Spring at Omnibus Theatre is jam-packed with thrilling world premieres, bold contemporary re-imaginings and vivid new writing. Companies in Residence Body Politic and Moongate, long-time collaborators like Conflicted Theatre and The Queer House, and our own production SAD sit alongside brilliant emerging and established theatre makers new to the Omnibus Theatre stage.

We’re jumping into 2022 energized by the brilliant work and enthusiastic response we saw here last Autumn. It is a new year and boundaries will be pushed, forms will be stretched, new voices will be heard and, above all, people will be entertained!

We kick things off in February by welcoming back a couple of our trailblazing favourites. Response: Orlando is a co-production with The Queer House, fresh from their smash-hit Bush Theatre run of Pink Lemonade. This radical reimagining blasts Virginia Woolf’s iconic novel out of 1928 and straight into 2022. Varjack-Lowry are a team at the forefront of digital work, and that is why it is so exciting to have them curate Get On The Internet!, an explosion of live and online hybrid theatre from a line-up of cutting-edge performance artists. This feast of female-identifying fabulousness takes us right up to International Women’s Day.

From flying fists to forbidden fetishes, Nothing In A Butterfly and Fiji land in Clapham this March to tell unflinchingly real stories and pose thought-provoking questions. Based on lived experiences, writer Ric Renton’s sharp new play Nothing In A Butterfly takes us from Tyneside to Dubai to ask how we can break a cycle of violence. Then Conflicted Theatre and Clay Party return with the fascinatingly twisted Fiji, a dark comedy inspired by true life events which challenges the extent of consent.

And then with April comes SAD. I, of course, don’t like to play favourites but must admit that I am particularly excited for our first full Omnibus Theatre production since 2019’s The Little Prince. I will be jumping back into the director’s seat for Victoria Willing’s hilarious and uncompromising new play, and I cannot wait. I hope audiences will relate to it and enjoy spending an hour or so in the company of these four wonderful and complex characters… in an attic.

This Spring we get to build exciting new relationships as well as welcome the return of so many friends and collaborators, from companies to freelancers, performers to directors. Without people we are bereft, which is why I am so grateful and excited to once again be ready to welcome artists and audiences back into our building.”

Orlando wants to Capital L Live, wants to make art, wants to find love.
Orlando’s having trouble finishing their epic poem ‘The Oak Tree’.
Orlando travels time, travels the globe, encounters climate disasters, falls in and out of love, marries nature.
Orlando goes to sleep a man and wakes up a woman.
Orlando suffers from depression.
We hard relate.

Orlando owns a stately home, has many servants, is casually racist and classist and embroiled in some dodgy politics in Istanbul.
We don’t relate.

6 creatives, 5 writers and 5 performers – all queer, trans or nonbinary – many from Global Majority backgrounds – many working class – share their theatrical experiments wrestling in the rich mud of Virginia Woolf’s passionate, funny, problematic book.

GET ON THE INTERNET!
PRESENTED BY VARJACK-LOWRY
28 FEB – 5 MAR, TIMES VARY, PRICES VARY

Get On The Internet! is a week long festival celebrating and showcasing some of Varjack-Lowry’s art babe faves based in the UK, Germany, Australia, Greece and the USA, in the run up to International Women’s Day.

The programme is jam packed full of online and hybrid events, including opportunities for a glimpse into the working process of 5 fabulous artists and companies taking up hybrid residencies at Omnibus Theatre; Aba Naia, Catherine Duquette, Jemima Yong, Simone French and Hot Cousin.

Throughout the week there will be performances and online content by Louise Orwin, Silvia Mercuriali, Fast Familiar, Ira Brand, The Demolition Project, and Sue Mayo.

To round up the festival, there will be a hybrid screening/listening party featuring work by Luca Rutherford, Georgia Akbar, Francesca Pazniokas, Eliza Soroga, Emma Ready and more!

A collaboration between artists Paula Varjack and Chuck Blue Lowry, Varjack-Lowry aims to develop a distinctive visual, theatrical, digital and participator practice; merging skills derived in filmmaking, theatre-making and participation. They have been supported to make work by The Barbican, Attenborough Arts Centre, Arts Depot, Camden People’s Theatre, The Yard and Clean Break.

The critically acclaimed true crime rom com is back and tastier than ever.

Modern dating can be a strange world at the best of times, but for these two ‘late-20 somethings’ things are about to get remarkable. Nick is cooking for Sam at his place and, if all goes to plan, this will definitely be their first and last meeting… so what exactly is on the menu?

Well, they do say the best way to a man’s heart is through his stomach…

Inspired by real-life events, Fiji is an entrancing ‘weekend away’ that blends true crime with First Dates to deliver a ‘beautiful’ amuse-bouche as hilarious and warm as it is fascinatingly twisted. This is a delectably unfathomable relationship – one you may have only ever heard about on the news…

In an age where food is fetishized and online dating is built to accommodate for the most specific of desires, Fiji asks how far a consensual relationship can go in satisfying the tastes of those involved…

Omnibus Theatre welcomes back this ★★★★★ thrill ride – the biting brainchild of Pleasance Futures Award winners and “modern masterpiece” makers Clay Party and the “vividly stark” minds behind last year’s smash-hit We Were Having A Perfectly Nice Time, Conflicted Theatre.

“You’re a market stall Gucci handbag. And I’m having more than that, more than you.”

Junk finds his rock bottom on top of the world in a way that only someone who’s had everything and nothing can understand.

He faces the alluring promise of a 48-storey plummet from the balcony of a Dubai hotel, but where will he go from here? And who is he really: Salesman? Highflyer? Addict? ‘786?’ ‘Little divie’?

Nothing in a Butterfly is a visceral odyssey from flying fists in Tyneside to hard sales in Dubai and the elusive search for the perfect pocket square.

Based on lived experience, this play spreads out from Newcastle roots to take us to some unexpected places. Sharp witted and raw, it asks what can save people from themselves; and what does it take to break a cycle of violence?

Ric Renton is a Geordie actor and playwright currently on attachment at Paines Plough. This is his true story of a boy who burned down the village to feel its warmth and the man who emerged asking how to put the fire out.

A fast-paced and fluid production reunites director Chris White and lighting designer Marty Langthorne after their critically acclaimed collaborations on Gutted at Omnibus Theatre, bottled at Vault Festival and Scenes from 68* Years at Arcola.

Get your arse out of here and come downstairs and be a normal person. Just be a normal bloody person!

On Christmas Day Gloria cooked the turkey that killed her mother. Now Gloria’s in the attic, sleeping on a dog bed and shitting in a bucket.

She’s perfectly content though. Her friend Magda visits. Her husband Graham brings ham sandwiches. Her neighbour Daniel fits perfectly through the Velux. In fact, as long as she can blast Bowie and bask in the light of her SAD lamp, there’s no reason to come downstairs at all.

A dark comedy about escaping your problems and the messiness of life.

★★★★★
“Delivers both on bleakness and glorious belly laughter.”
The Independent (on Spring Offensive)

About Omnibus Theatre
Omnibus Theatre is a multi award-winning independent theatre in Clapham, South London. Finalist in the Fringe Theatre of the Year 2019 The Stage Awards, Off-West End Award winner 2018 and 2020, and recipient of the Peter Brook/Royal Court Theatre Support Award in 2016. The heart of the organisation’s ambitious programme lies in classics re-imagined, modern revivals and new writing. Omnibus Theatre also provides a platform for LGBTQ+ work and aims to give voice to the under-represented and challenge perceptions. Since opening in 2013 notable in-house productions include Woyzeck (2013), Macbeth (2014), Colour (2015), Mule (2016), Spring Offensive (2017), Zeraffa Giraffa (2017), Queens of Sheba (2019), The Little Prince (2019), RICE! (2021), The Human Connection (2021) and The Girl Who Was Very Good At Lying (2021).