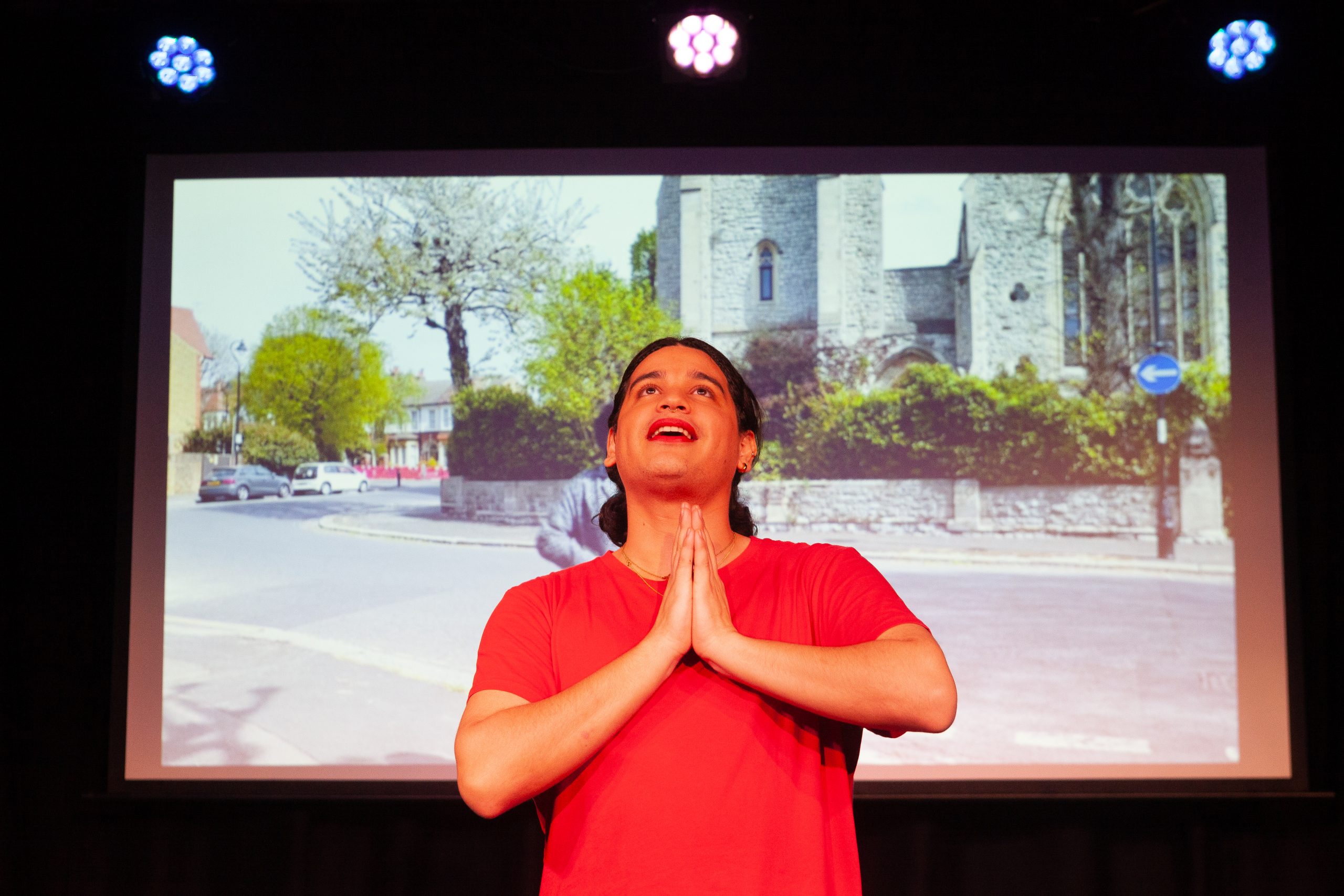 In Conversation With | The Concha Team

A Q&A with the creative and producing team behind Concha. Hear Carly Fernandez (writer and performer) and Olivia Crawford (producer) chat about their semi-autobiographical show Concha, which explores the intersectionality of the queer experience from the perspective of a non-binary Latinx person.

INTERVIEWER: Tell us what your show Concha is about.

CARLY: Concha is a play that explores the intersectionality of the queer experience from the perspective of a Latinx non-binary person. We follow Concha as they’ve just found out they’ve contracted chlamydia, which takes them on a journey of past and current relationships, queer sex, race, self-love and the use of condoms.

INTERVIEWER: What inspired you to write Concha?

CARLY: It was inspired by the cathartic desire of wanting to move on from my past.

I feel that as queer people, sometimes we can be subjected to trauma from quite an early age, due to the judgment, stereotypes and misconceptions of what queerness is, that trauma (if left unresolved) can, if not mostly, make its way to our adulthood, affecting how we see the world, the people around us, and ourselves.

With this play I wanted to explore the trauma that I experienced in my life due to the fact that people couldn’t understand the beauty behind my queerness and therefore they turned it into something ugly and by default turning me also into something ugly.

The character of Concha goes through a journey of self-discovery, peeling layers and layers until eventually finding what was the thing that drove them to make all the decisions in their life – which is the trauma that they’ve experienced – and how to move on from it and finding yourself again.

Every time I wrote a sentence on this play I thought of my younger self and what was it that they needed during that moment, which pushed me to heal myself in the process of writing this, now I understand that my past will always be a part of me, but now I’m finally ready to stop running away from it and to not let it define my future anymore.

The desire and need of wanting to move on from something, was a powerful tool that only inspired me to write this play, but it also helped to heal.

INTERVIEWER: As Concha is a semi-autobiographical show, how did you find the process of putting your own experiences on stage and treading the line between your lived experience and the fictional parts of the plot?

CARLY: In terms of performing, it wasn’t as challenging as I thought it was going to be, as I was able to clearly distinguish what was fictional and what was a real lived experience.

In terms of writing, the challenges were bigger, specially having having to link the fictional part of the plot to the lived experiences of me as the writer/character – but with help of my director and dear friend Manisha Sondhi – who has heard/read pretty much every version of this script – we were able to connect the dots and make it a more straight through line.

I think that when we’re tackling things that are part of our lived experiences, we should really take care of ourselves and pay attention to our mental/emotional/physical health. It’s really important to surround yourself with people who understand you and want to support you.

INTERVIEWER: Why does this story matter now?

CARLY: Some people like to think that because we have shows like “RuPaul’s Drag Race” we have achieved true equality, when the reality is that we’re far from achieving equal rights in terms of the LGBTQ+ umbrella.

Queer rights (the few ones we have) are under attack now more than ever, with the rise of the far right in countries like USA and UK – a play that centres a non-binary person of colour, could not come at a better time, as we need to have these conversations, we need to make ourselves be visible and we need to use our voice to not let them silenced us.

INTERVIEWER: What would you like audiences to understand about the queer Latinx experience by watching the show?

CARLY: As this is an intersectional identity we often don’t get to see in the media (specifically British media) – First of all I want people to see that Latinx people exist in the UK, that queer latinx people exist and how the two of them are not separated parts of my identity, but that they’re my identity.

I want the white queer community to understand the privilege they hold within society in comparison to a queer person of the global south.

I want cis-het latinx people to understand the struggles a queer person goes through on top of being latinx.

INTERVIEWER: What change would you like to see in theatre and culture when it comes to queer representation?

CARLY: British Theatre is a very white elitist industry – a place where unless you have money, speak with an RP accent, are white, a man, cis and straight – then there’s barely any opportunities for you.

I want the industry, no, I need the industry to acknowledge the fact that diversity is nowhere near where it should be and actually take real action to change it, we need to create more spaces and opportunities for people who don’t fit that demographic, everyone should be able to see themselves on stage and where the industry currently is, not everyone can.

INTERVIEWER: What has been the highlight of working on Concha?

CARLY: Being able to work with amazingly talented women.

OLIVIA: The highlight of the entire experience would of course be my collaborators. There is no one like Carly in the world and I’m beyond lucky to know them, let alone get to see them create with their totally unique brain, and touch audiences with every choice they make onstage. Manisha inspires me every day with her drive and the way she sees such small details that when explored change the entire meaning of something. They are both unbelievable artists and I know this is just the beginning for them. Beyond that, everyone who has contributed to Concha is felt in some way (from its early days in 2020 to a few months ago at Brixton House) – we couldn’t have done this without you.

INTERVIEWER: What’s been the most challenging part of producing Concha?

OLIVIA: Much of producing Concha has been challenging! We are a small but mighty team so many responsibilities overlap, which means we are all juggling a lot of hats. On top of that, it’s also been a challenge to grab our audience in the saturated industry like the one in London, so it has taken a little extra effort to market to the people we know this show is for. But everything has been worth it!

INTERVIEWER: What excites you the most about Concha?

OLIVIA: What excites me most about Concha is the audience reaction. It’s really hard to summarize this show because it’s everything all at once in the absolute best way. Beyond that, this show has something everyone can relate to, but it’s not made FOR everyone. Carly wrote it to put onstage the people they wanted to see: a flawed queer character that’s not a victim but a human being that makes mistakes, which is exactly who it’s for. I’m most excited when I see that audience come out buzzing about what this meant to them and how Carly’s words hit something deep inside. That’s why Concha is important.

INTERVIEWER: What’s the future for Concha?

OLIVIA: Concha is taking the Edinburgh Fringe Festival by storm this summer from 5-20 August at theSpace @ Symposium Hall so catch us then! Before that, we’re doing a preview at Glass House from 21-22 July (and that’s just the beginning…)!

INTERVIEWER: Lastly, give us three words to describe the show!

Concha will be performed at Omnibus Theatre on 9th July as part of 96 Festival. Find out more here→