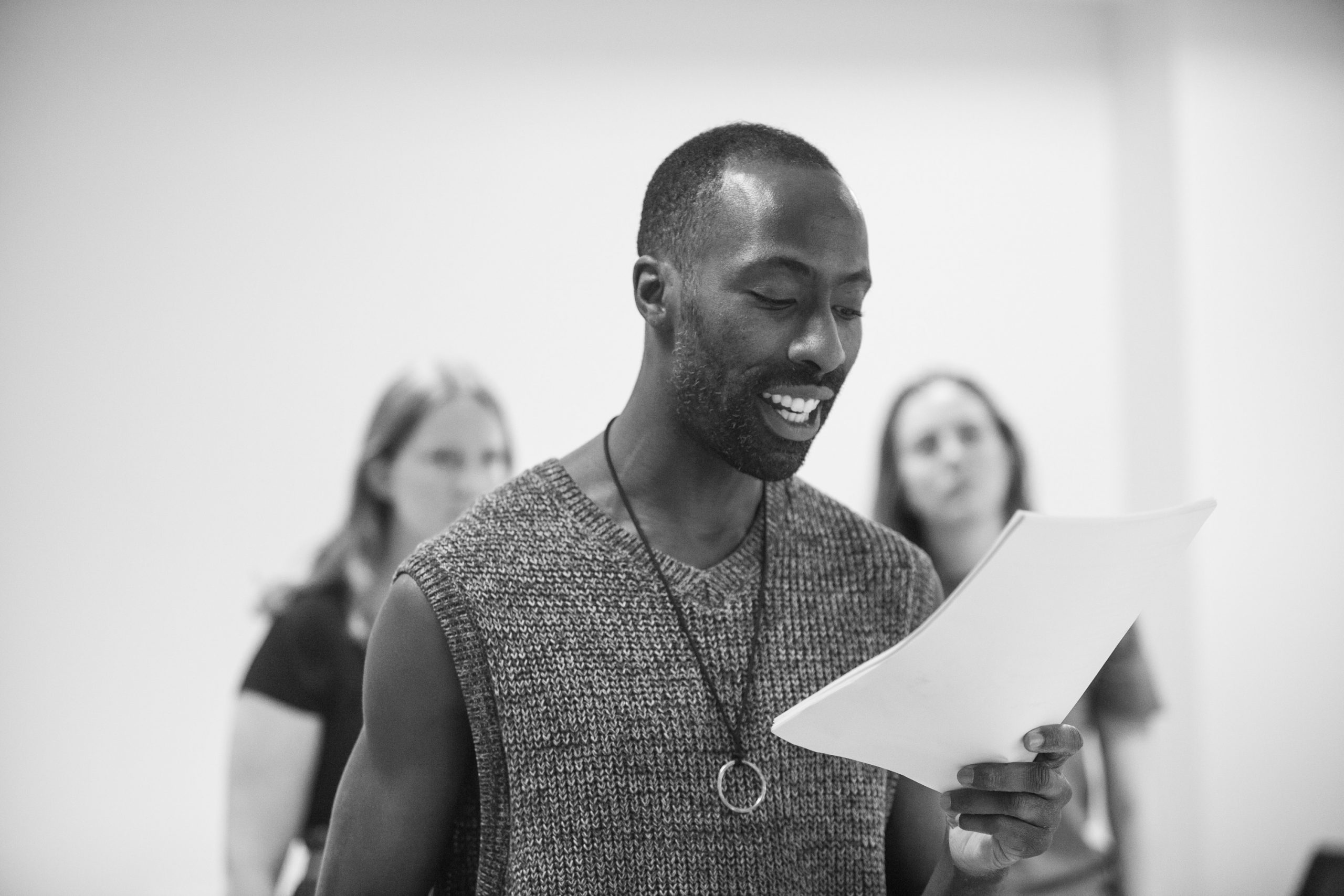 By Omnibus TeamSeptember 29, 2022News
No Comments 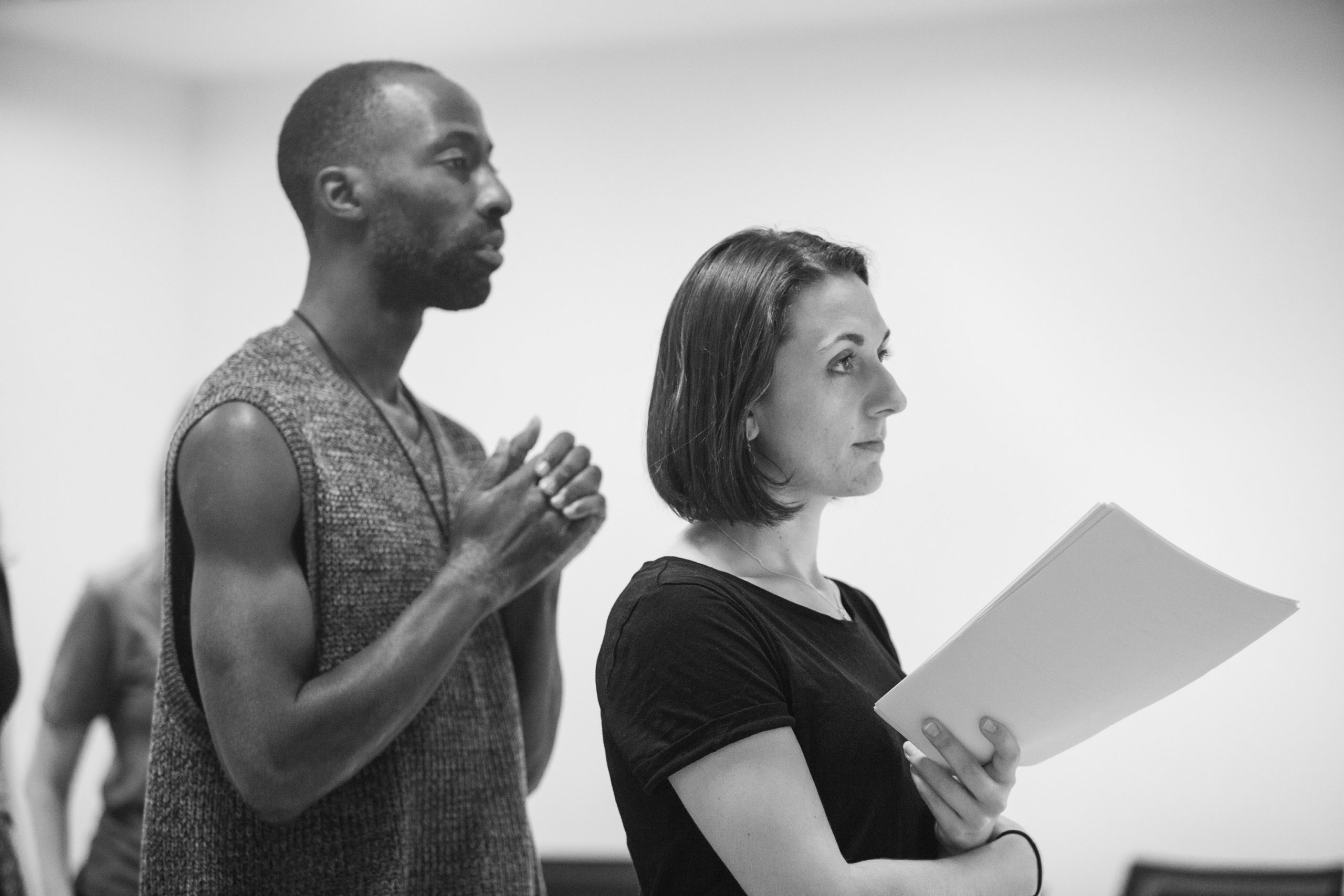 Joey Akubeze and Evie Florence in rehearsal for the play Cassandra, by pioneering Ukrainian playwright Lesia Ukrainka. Translated by Nina Murray and directed by Helen Eastman, it is being staged in London for the first time by Live Canon and the Ukrainian Institute London, in association with the Polish Cultural Insititute, the Lithuanian Cultural Insititute, the Goethe Institute and the Institute Francais. Performances will take place at Omnibus Theatre from 4-16 October 2022.

Like the rest of the world, Live Canon has been watching the war unfold in Ukraine in awe of the resilience of the Ukrainian people and wondering ‘what can we do to help?’. When the Ukrainian Institute, London approached them in May to help them stage the English-language premier of Cassandra by iconic Ukrainian poet and feminist, Lesia Ukrainka, they couldn’t say yes fast enough.

The spark for this project is a new translation by Nina Murray, poet and winner of the Ukrainian Institute London’s 2021 Literature in Translation prize. We caught up with Nina to discuss the poetry and politics of this Ukrainian literary classic, both on and off the page.

INTERVIEWER: When did you first discover Lesia Ukrainka’s work and what drew you to translating it?

NINA: Like every Ukrainian school student, I had to read and memorize Lesia Ukrainka’s works when I was a teenager. At school, we read The Forest Song, which I would describe as a retelling of the Orpheus and Eurydice myth, with the twist that Eurydice makes all the choices (because, of course!). I can still recite a couple of lines from the final monologue of the play. At the time, I was a budding poet, and the conflict of The Forest Song – between pursuing one’s art and taking a great risk and living a conventional life – resonated with my overwrought 16-year-old self profoundly.

Over the years, I have read and loved [her] other plays, Cassandra among them, but I never thought I would have the opportunity – or the courage – to translate one of them.

I chose an excerpt from Cassandra as my submission to the Ukrainian Institute London’s Literature in Translation prize when I re-read the play after spending ten years as a U.S. diplomat. I was struck afresh by how relevant the conflicts are: who is to be believed, and under what circumstance? What happens when a critical insight comes from a woman?

INTERVIEWER: Why is now the moment to bring this play to the stage?

NINA: I think we are caught right now in a sort of “peak propaganda” moment, when we have all seen how a narrative of something can become a thing in itself and drive political decisions. Cassandra is, among other things, about the power of narratives, and specifically the power of narratives that are intentionally designed to get hold.

And then, of course, we are also in a time of awakening to Ukraine overall, and its literature and culture in particular. Cassandra has been enjoying a robust revival in Ukraine, but, like Lesia Ukrainka’s most other works, it is new to the English-speaking audiences.

INTERVIEWER: What is unique about Lesia Ukraine’s portrayal of Cassandra?

NINA: Ukrainka’s Cassandra is not an otherworldly creature – despite being touched by the gift of prophecy. She is a member of the royal family, a highly visible public official (as a priestess of Apollo), and a citizen of Troy. She is enmeshed in a close-knit network of family and political relationships. She is a woman apart, and a fully realized human being.

Most importantly, in this play, Cassandra’s is the perspective through which we see the events. She gets to tell the story, rather than being a minor character in it. And in this telling it becomes clear that rather than being constantly manipulated by others and being at the mercy of her terrible gift, Cassandra retains agency and exercises her own will.

INTERVIEWER: What are the challenges of translating another poet’s work?

For me, the key here – as with every writer I translate – was to slip on their voice, to put on a mask if you will, and to hear the lines as Ukrainka might have heard them, or wanted to hear them. It is a kind of acting and an experience of being possessed, to be sure.

Another thing that is crucial for me (in translating both prose and poetry) is to capture the cadence of the author’s language. With a text written in an iambic meter, this was easy. Once the cadence, the rhythm, gets under my skin, words come easily.

INTERVIEWER: How has this influenced your own writing?

NINA: Oh, everything I wrote came out in an iambic meter for a while! I also wrote a prose poem that is a letter to Cassandra. In it, by an act of my own creative will, I summon an alternative ending to her story.

Cassandra will be performed at Omnibus Theatre on 4-16th October. Find out more here→